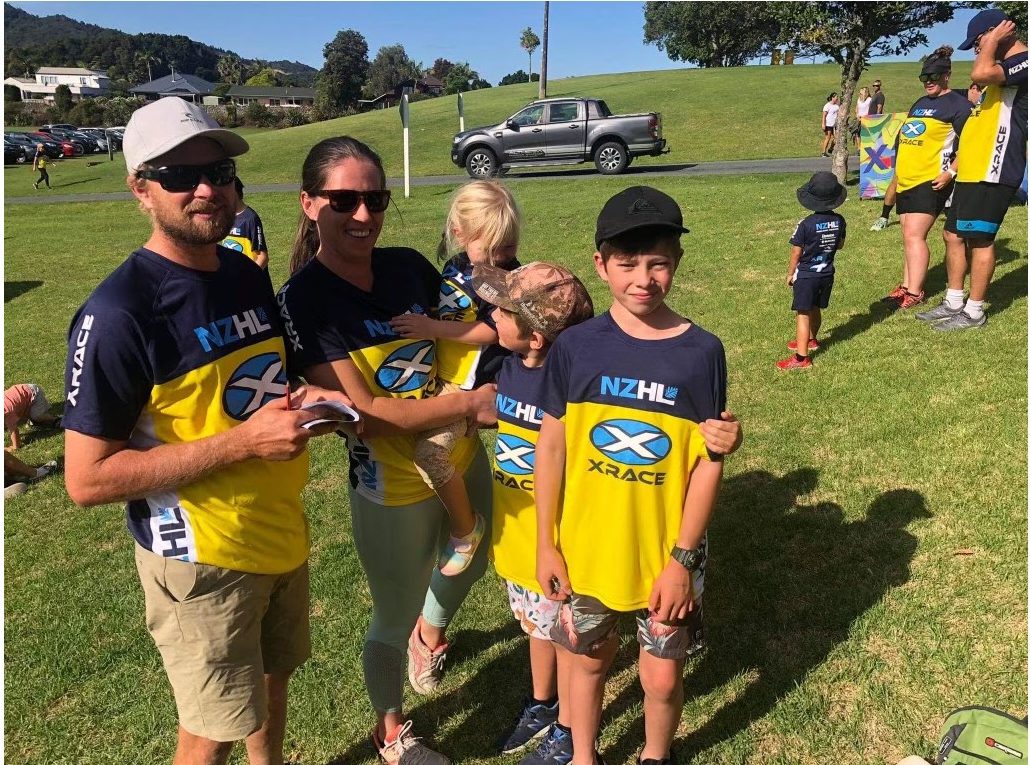 Chances are, he would be dead or have severe ongoing physical and mental challenges were it not for a flight on December 16, 2018.

Luke lost control over a jump at Red Hill Motor Cross track while riding at 70km/h. He lifted off ‘Ski Slope Hill’, soared into the air, hit the ground hard, lost control and was sent flying into the deck.

He was unresponsive when his wife Sunny and club medic Mandy – both nurses – arrived on the scene moments later.

Says Luke: “I had only ridden my dirt bike once in a year because I was so busy on the farm. I hurt my knee in the first race and wanted to catch up to my brother in the second. I remember starting my bike but don’t remember anything of the race.”

Witnesses say Luke was cartwheeling after he came off his bike. His injuries were substantial. They included C2 to C7 spinal fractures, fractured left rib, a broken arm, split in the ball that holds the thumb together and his visor had cut his eye. As always there were the unknown internal injuries.

Sunny says she and Mandy raced down the hill and their nursing calm kicked in.

Luke was breathing but was unresponsive and she could see obvious injuries to his face.

“We removed his helmet with special caution. IT was important to keep his neck still as we cut his gear off. I grabbed his wrist to move it on to his chest and his arm did not follow,” says Sunny.

They were quickly surrounded by a team of helpers, the Te Kopuru Volunteer Fire Brigade and the local Ambulance. Forty minutes after the accident the Northland Rescue Chopper arrived after being diverted from another incident.

Due to the potential spinal injuries, air transfer was the only safe option to get Luke to Whangarei Hospital.

The situation was dire. Luke’s level of consciousness had quickly plummeted from 15 for four … three being the lowest and most dangerous level. Thankfully he was back up to 12 by the time he landed at Whangarei Hospital.

Meantime, Sunny had three children to get home and sort baby sitters, while sorting help to attend to livestock and the milking of their dairy herd before she could drive to hospital.

“I was more in shock. I don’t remember what I thought. You just have to go with the processes,” says Sunny.

After time in ICU, Luke was moved to the surgical unit for a wrist operation and a check on his eye. Luckily it was okay.

He was transferred to Dargaville Hospital on December 22 and was home on Christmas Eve – still with a lengthy recovery to go … even if he did not realise it.

Luke constantly requested being taken out on the farm and tried to organise what needed to be done, despite 15 minutes of concentration forcing him to bed for an hour or two.

“Sleep during the day is not something a farmer does. I was in a bad mental state. I just was not with it.”

Six months of concussion therapy followed and it took half of that time and some anti-depressant medication for Luke to begin to comprehend what was going on with his brain.

“The brain injury was a massive one that I could not get over. It really broke me. I was going mental,” says Luke.

Sunny says it was like having a toddler again.

“I could not keep him from the farm. He had no sense of reason.”

Deep breathing, meditation, the support of his medical team, friends, family and Sunny and his children at his side began to lift the now 35-year-old.

One of the biggest triggers back to wellbeing was six months after the accident.

Luke had just had his cast off his arm and was desperate to get to Baylys Beach for a swim with the family.

He was barely in the water when he saw a man collapse in the surf while launching his boat. Luke went to him and his first aid training from his years in the mines in Australia kicked in.

“I ran to him and I thought this guy is dying. Incredibly for me, for someone struggling with a brain injury, the DRSABC kicked in and I started giving him CPR. I did the first minute of CPR and there was no sign of life, then 30 pumps later I felt his heart kick in again and he opened his eyes.

“Next thing the Northland Rescue Chopper picked him up and there is a fantastic photo of it on the beach with everyone around. He was a Dargaville local and I believe he is still alive today.” Says Luke

Talk about having being payed forward and then Luke getting the chance to pay it forward while still recovering from major trauma.

His message to farmers is simple – donate to the Northland Rescue Chopper Service and help save lives.

“We and my parents do on this farm and always will. We can’t do without it.”