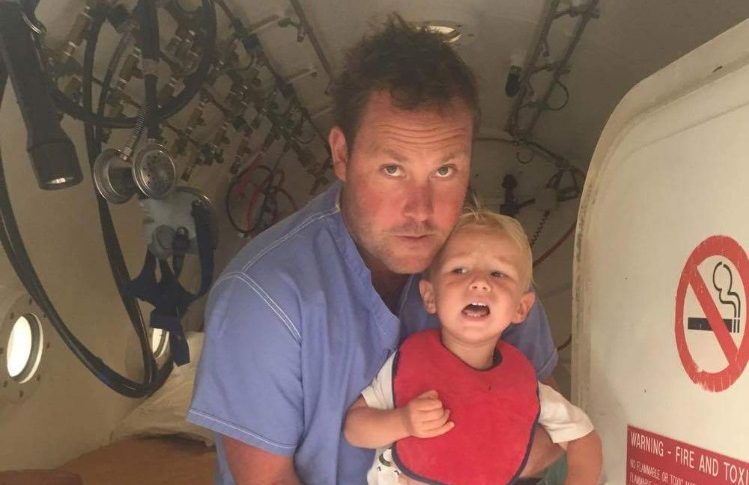 An afternoon out in the boat to dive for scallops turned into a different type of adventure for Maungataroto farmer, Logan Diamond.

“I was out diving in the Whangarei Harbour at a favourite spot and had been down a few times. On my next dive, I started feeling a bit average but kept going, and before long I wasn’t feeling very good at all,” Logan says.

“I must have come up too fast or too many times, and once I was back in the boat that last time, I really felt like it was all closing in on me. Down on the sea bed, I had felt like I was going to vomit and the feeling just got worse. Something definitely wasn’t right. I felt like a bad mix between sick and drunk.”

Once back on shore, Logan vomited, but still tried to make it home, where he was found by his wife Zaria, asleep in his ute and still in his wetsuit. Panic kicked in and Zaria stripped him of his wetsuit, dressed him and got him into her car to take him to Whangarei Hospital.

“I was panicking but didn’t want to show our two-year-old that, so I just hurried to get him into my car to take him to hospital. I knew it wasn’t good. On arrival, they said a nitrogen bubble might have passed through his brain and by that point I was a trembling mess but holding it together for him and our baby,” Zaria says.

“I felt better when they said the rescue helicopter was on its way to collect him and take him to Auckland, as I knew it meant he would be getting help faster. Without that helicopter, I don’t know if he would still be here today for his kids and me.”

The Northland Rescue Chopper transported him to North Shore Hospital, the country’s specialist hospital for dealing with the bends. Logan remembers it well, despite his condition.

“The guys in the helicopter were so professional. They came in and spoke with me before the flight and made me more comfortable about what was ahead. During the flight, they talked to me the whole way and kept me informed – even when we were on the roof of the other hospital, they kept reassuring me.”

In the following days, Logan was transferred from the hospital to the local naval base in Davenport each day to undergo decompression treatment for hours on end.

“It was definitely an experience going into the decompression chamber,” he says.

Back to his normal self, Logan says he is thankful for the help of the rescue chopper.

“Four months ago, I had no idea that it would be me needing a helicopter. I am very thankful that we have this service and it helped me heal from what could have been a much worse situation.”