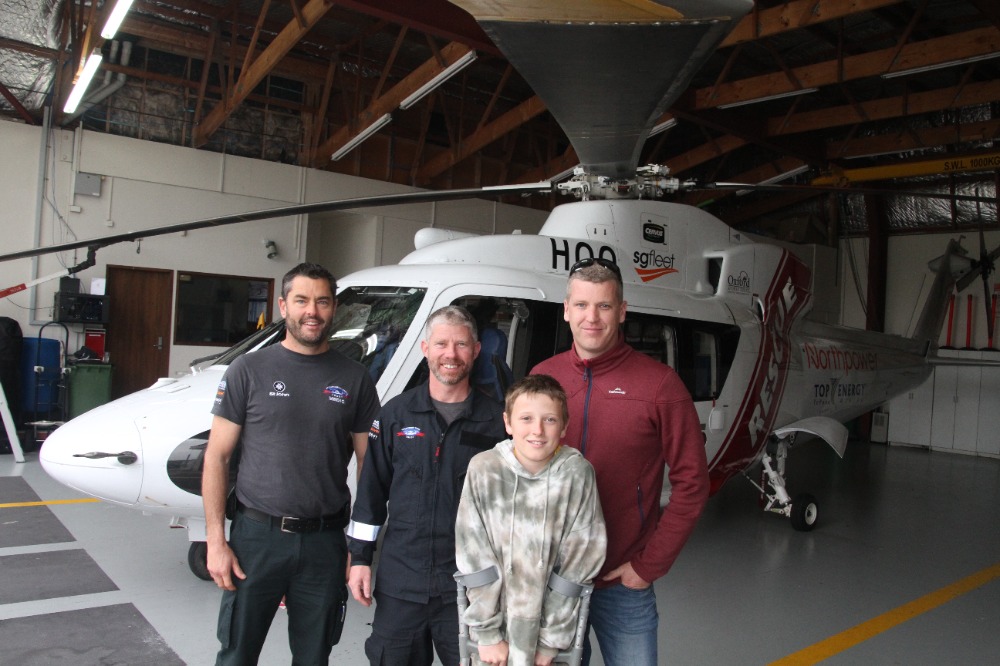 About to take a short drive to Waipu after work to coach his son’s rugby team, the outing quickly turned into a nightmare for Ryan Hall when he received a phone call from his daughter Sophie about an accident.

A few minutes later he arrived at the accident scene which was carnage.

Passer’s by removed Kayden from the ute and lay him on the side of the road where he was being comforted by his sister. Kayden had suffered a broken right femur, although it was unknown if he had internal injuries.

Dad Ryan says he turned up just minutes after the accident and Kayden was in a lot of pain.

“I knew it was really bad when I got there so I purposely didn’t look at the cab of the ute,” says Ryan.

“It was my worst nightmare. I was really concerned about what other injuries he might have had. The Northland Rescue Helicopter guys were incredible and the medics amazing also.”

After the medics were able to stabilise Kayden and give pain relief, Ryan and Kayden were flown to Starship in Auckland and remained there for a week.

While Kayden, who is in Year nine at Bream Bay College, says he remembers the accident he does not remember much of the chopper ride. One thing Kayden does remember is the medic talking to him through the chopper ride and asking him about his rugby and his favourite position!

Ryan remembers the flight through to Starship was a scary experience for him and Kayden. That was due to the fear of what Kayden’s internal injuries could be and the fact that his leg looked awful.

“The crew on the chopper were incredible to say the least. They made sure at all times Kayden and I were able to see each other and kept us up to date with what was happening. They chatted with Kayden about his hobbies and had a real personal care touch. Words will never show our true gratitude.”

Kayden and Ryan have since met their pilots and medics so they could say thanks for being cared for so well.

Kayden had pin removed in late September, leaving him with just a couple of tiny scars. He had made great progress with his rehab and wants to be back free diving over summer and playing rugby next season.

On reflection, Ryan says he is pretty proud of Sophie with how calm she was at the accident scene.

“She told me Kayden’s leg was a bit sore so when I was driving there I was not too panicked. I was trying to find Kayden though all the people. You are always going to go into some kind of shock but I am very grateful how well we were cared for and the ultimate outcome for Kayden.”