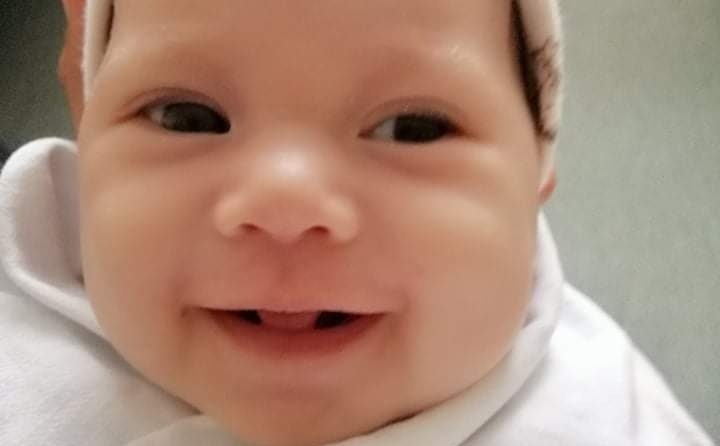 Renee Henare knows how crucial yet slow every minute can be while you sit with a sick newborn in your arms and awaiting help.

The Northland mum of seven feels forever grateful to the Northland Rescue Helicopter who she says played an important part in recently saving the life of her youngest child, seven week old Dorothy.

Just two weeks old at the time, Dorothy, affectionately known as Dottie, suddenly was feeling unwell and was sleeping a lot. Dottie had a sore tummy and it had finally settled so mum Renee thought she was just sleeping off a day of discontentment. Before long, she was soft and floppy and not wanting to feed and only wanting to sleep.

But when Dottie kept sleeping and was hard to wake, she knew something was wrong and didn’t waste any time in calling for help.

Tiny Dottie had been moving her arms and legs around in her sleep, a lot more than usual and it was concerning. Renee later learnt that these were seizures.

Due to her rural location in Cable Bay, she was told to head to Taipa and wait for the rescue helicopter to arrive.
On arrival, she said the paramedics instantly put her mind at ease even though she knew her daughter was severely ill.
“While no one knew what was wrong, they just got in there and started to help. It was amazing – and they kept me calm as we took off,” Renee says of the ordeal.

“The flight felt like it went really fast. From Taipa to Whangarei it was 40 minutes – the fact that the helicopter was so much faster than if we had driven anywhere, it made such a difference to her life.”

On arrival at Whangarei Hospital, Dottie crashed and had to be resuscitated. Once stable, she underwent a range of tests and was diagnosed with meningitis.

Within hours, she was flown by another rescue chopper from Whangarei to Starship Hospital in Auckland where she stayed for a further five weeks, only returning home two weeks ago.

“In all honesty, if it wasn’t for the Northland Rescue Helicopter that day and getting us to Whangarei so quickly, I think my baby would not have made it. I don’t think she would be here with me now.”
And now Dottie has a long recovery ahead of her.

“She is an awesome happy baby but she will have some long-term effects from the meningitis. She might have hearing loss, but we have to wait until she gets a bit older to check, and she has a brain injury from the meningitis. She also has severe epilepsy and might have some cerebral palsy as a result of it too – but she is here with us and smiling away. That is the main thing. She is a beautiful baby.

“If it wasn’t for the helicopter that day – it might have been a lot different.”